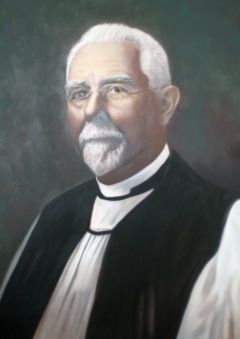 The Right Reverend James Steptoe Johnston, D.D., was born on a family farm near Church Hill, Jefferson County, Mississippi (a few miles north of Natchez) on June 9, 1843. Johnston’s father was a wealthy planter and a lawyer whose peers considered him a worthy Southern intellectual. The son was sent to Oakland College in Lorman, Mississippi (Oakland became Chamberlain-Hunt Academy in 1879), where he was a student in the preparatory department. But the fun-loving Johnston found Oakland too strict. He left his own country in 1859 for the University of Virginia, where he matriculated and joined his brother Charles. Many Oakland boys went to Charlottesville to gain their higher education.

Mississippi seceded from the Union on January 9, 1861. No later than June of the same year Johnston had made his way to Harper’s Ferry to volunteer for service in the Confederates States Army. We know that Johnston was in the 11th Mississippi Regiment when Lee’s Army of Northern Virginia faced the Federals at Antietam Creek September 17, 1862. Johnston fought in eleven other engagements before he was taken prisoner toward the end of the war. In addition to Sharpsburg, he fought at Yorktown, Seven Pines, Seven Days, Gaines Mill, Malvern Hill, Second Manassas, and South Mountain. Surviving bloody Sharpsburg as an infantryman charging through the infamous Corn Field (the 11th Mississippi participated in Hood’s Counter-attack), Johnston joined J.E.B Stuart’s Cavalry Corps in the autumn of 1862. He was promoted to Second Lieutenant then wounded in 1863. While on leave in Mississippi to recover from his wound, Johnston was taken prisoner by Union troops and shipped to an island prison in Lake Erie called “Johnson’s Island.” As fate would have it, the rebel prisoner was incarcerated at a place named for an eighteenth century ancestor.
The best use of wealth
is to coin it into character.